Triplett & Carothers is proud to congratulate the Louisville Chapter of the Tri-Loco Triathlon Club and, in particular, three senior members for their recent triathlon achievement in the 70-74 age group: Barry Rowe, first place; Jim Maginnis, second place; and Johan De Jong, third place. The law firm has been a title sponsor for eight years.

The June triathlon was organized by Team Magic from Nashville and involved biking in downtown Louisville, swimming in the Ohio River and running on Waterfront Park. The event included close to 800 competitors from multiple states. 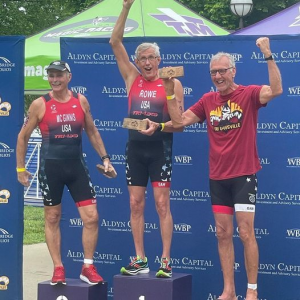 Best described as a social club with a habit of winning, Tri-Loco consistently dominates podiums nationwide, but does it while having a great time. Its membership base includes every skill level from “back of the packers” to Kona qualifying professional triathletes. Its goal is, and always will be, to bring added value to all aspects of racing, training and even spectating.

Most importantly, a Loco knows no strangers, … so next time you see us at an event do not hesitate to join in on our fun!

Triplett & Carothers’ Operations Manager/Client Concierge Reggie Garcia is the president of the Louisville Chapter of the Tri-Loco Triathlon Club. Beyond the “Locos,” Reggie coordinates the firm’s commitment to the non-profit community and its goal to building awareness for physical fitness.

Reach out to Reggie here to learn more about the firm’s community involvement or to join the Locos.